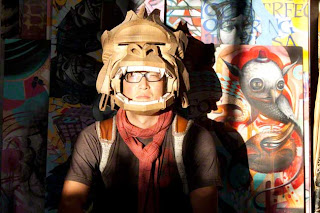 WHAT IT IS LIKE TO PEEL JOHN PARK
It is one of those things, to get to know a painter through his or her work, but it is a whole other thing to get to know them outside of what they create. John Park, himself, is bold, gifted, and wise; a true complement to what he applies to chosen canvas. "We are the vampires of the world." Park says, with hope, in regards to the States. "... we've lost track of the notion that the pursuit of happiness should involve the greater good instead of self-indulgence." With those words he lit a fire inside of me. I wanted to dig deeper into his humanistic side and see beyond his painted layers. 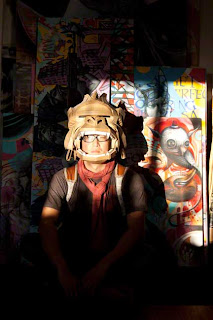 Born into a traditional Korean family in Columbus, Ohio, Park says, he could have been expected to become a lawyer or doctor; most anything but not an artist. As most boys do he envisioned himself a fireman, navel seal, or a deadly ninja. "If ninja existed as a career I wanted to be that." he stated with a mischievous grin. I saw a child-like sensibility pass through him for an instant.
Since he knew he wanted to become neither doctor or lawyer he considered the marines but he had been creating art since he was knee high and through his recreation of Calvin and Hobbes expressed his longing to continue on that journey. At the mere mention, by a family friend, of a prestigious art college in Rhode Island and the support of a father, who's own natural artistic talent was squashed, he was given carte blanche to dive into a creative future. His love for the greats helped to inspire and teach him, when painting, to do an accurate representation then to stylize. "To stylize something is much much harder then to do an accurate representation." He mentioned once he had figured out how to recreate a scene it gave him the foundation he needed to create something of his own. 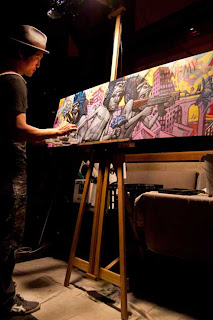 His own, years later, includes a huge concern about our society and where it is headed. The food we consume and the waste we accumulate. "We are in the most self-indulgent, entitled society thats ever existed on the planet and we continue our march towards our own extinction." Now in all of our history I find it hard to believe that we, Americans, are the worst but in looking at the waste in which we are creating by the minute and the levels of unconsciousness of the people sustained by our governing parties I would say he has a damn good point. He spoke about consumerism and the intelligence of pigs. With websites like TED he learned and explored how human beings remember experiences.
Park's thirst for understanding is met by his passion of humanity. It had become more and more clear as we continued our interview that this inspiration ran deeply through him. Gorillas in masks.
"America started off as whats called a share holder, a steak holder nation. Everyone of its citizens felt like they had a steak in what was happening to the country and where the country was going." He and I both looked at each other with the realization that we no longer live in a country with that belief system. Maybe a bit scary. 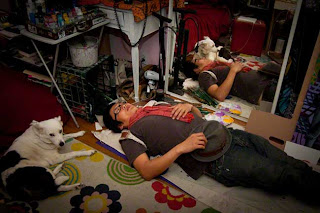 Perhaps there are many answers to change; towards a truly sustaining or long-term society. Park's contribution is not only the messages he incorporates into his work but a nature based in seeking truths and resolutions by being curious and proactive. 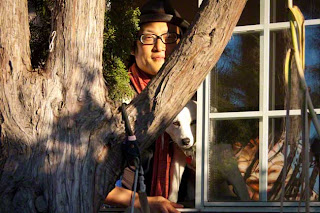 And incase you are interested in making John some yummy food in the near future. Here's a little help. His favorites are
1. Unnamed Korean soups
2. Pork ribs (until he recently stopped eating pork)
3. In and Out
4. Veggies
5. Raw milk
But be warned. He is making forward motion towards a healthier, more conscience set of eating habits. Nice!!!


Posted by Pop Culture Taxi and Maxwell at 7:38 PM