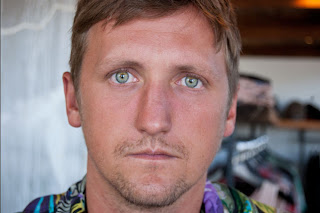 5 Things you may not know about him...
1. Raised in the Virgin Islands until middle school
2. Really enjoys dancing (only under the influence)
3. Wanted to be a paleontologist as a youngster
4. Can't draw well but does it everyday regardless
5. Dreams of owning a sailboat
Check out his show starting July 30th at Insight LA, 1501 Main St. Venice.
"WATER SKIING with DEEPAK" 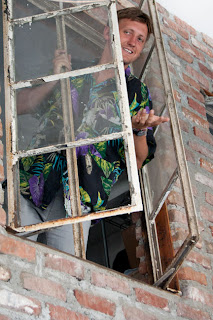 Despite his love of fossils and his strong reputation in the art community especially in Japan he still makes time to goof around with his friends and his buddy Hector.
His sense of humor is beyond expectation while his art is its mirror; wittily simple but poignant.
His day consists of getting out of bed to meet his paints and after a quick roll in aesthetic hay he grabs a scoop of dog food for Hector, who's probably worked up quiet an appetite. Then after attempts at perhaps the beginning, middle, or end of created prospects stir-craziness sets in and he's off to the beach to surf. Later, after the waves have pounded enough energy out of him, his own hunger takes him south. Yesterday it was Windward Market for an incredibly large sandwich.
After a few Modelos, a visit with the buds, and occasionally a dancing spurt he heads back up the mountain to add more paint to the leftover blue paint under his finger nails. 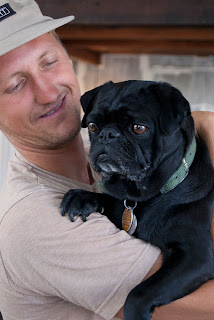 This is Hector. Then there is Ty and Justin Tong, below, mucking about at Insight.
You also may not know that Ty's facial expressions change drastically depending on what he is reading or looking at online. 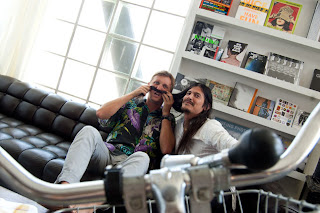 Posted by Pop Culture Taxi and Maxwell at 10:29 PM