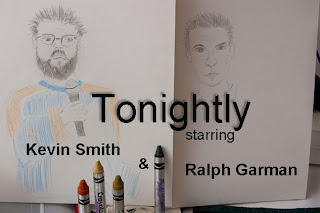 
"Necessity is the mother of invention" hence the campy drawings. It was a bit hard to get a one-on-one interview with photos of the project sense both men were very busy but trust me I tried.
In just a few short days they had guests that ranged from Alanis Morissette to Knocked Up's Seth Rogan and a hot number covered in tattoos who cooked a mean dessert in less then 5 minutes. He had "snow" and "dirt" everywhere. It even made it into Smiths mouth.
John Goodman, also a guest on the show, exchanged uncomfortable laughs with Smith while trying to stay on his bar stool before he quickly rushed off.
The show received a few stomach clenching laughs from the fans in the audience. They seemed to be having a good time. The crew maintained their interest and high hopes in the project as the pilots continued and though I can not imagine that Kevin Smith is really done with making movies it is very apparent that the new direction he and his partner have embarked on is a direction that they both feel passionate about. Lets see if their prospect money bags feel the same.
Posted by Pop Culture Taxi and Maxwell at 8:19 PM