For Ink and Iron: Thou Shalt Commit Thyself 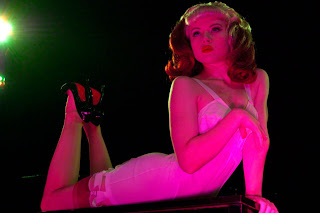 INK AND IRON
Never was there so much colorful, vintage eye candy as there was this particular weekend. The Queen Mary hosts the Ink and Iron Tattoo & Kustom Culture Festival, which happened to be crawling with glamorous, Pop Rock colored haired females, decked out in their 40's/50's best, accompanied by more men with dashing pompadour's covered in gobs of grease. Warning: It's a sticky business. Cars, music, clothes and contests were just some of what inspired visitors to get their hands dirty. Here's another one... Mosh 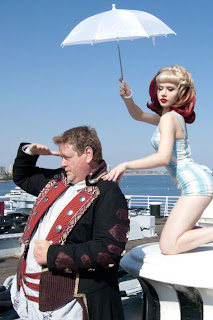 Dr. Sketchy's LA in collaboration with Ink and Iron ran the largest Dr. Sketchy's to date bringing in top pin-up models like Mosh to model for the event. That just added the cherry to the top of this weekend's sundae. Artists and non-artists alike came and tried out their drawing chops leaving with pencil smudges and perhaps pieces of paper representing the fruits of their labor.
In the tattoo rooms the air was think with one word: permanent. There were men and women alike lying on beds, tables, chairs, or the floor in attempt to get comfortable while some tattoo junky works on their specified body part(s) sealing what will become a mostly permanent fate.
Other artists like the Pizz, who does not actually sling the ink, advertises a different form of art: temporary; right up my alley, then again, I suffer from commitment issues.
Other events included a tattoo competition, a Pin-up Model competition, and lots of live bands like the Buzzcocks and The Vandals. YAY:) 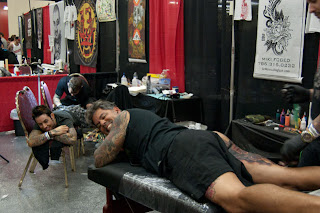 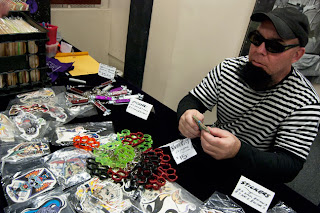 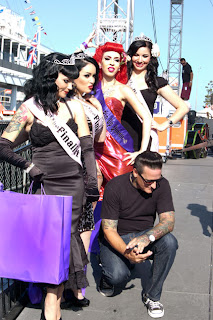 Perhaps all the beautiful colors were due to Manic Panic         then again not everyone was old school; It's 2011 there's Pravana...

Posted by Pop Culture Taxi and Maxwell at 3:02 AM