I Wonder What The French Think About Our 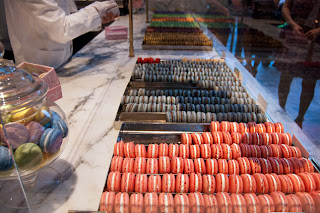 LE MACARON POSSIBILITIES
When the crazy for French macarons started it is hard to say but over the course of the last few years restaurants, specialty stores, and grocery stores have started to carry these delectable delights. Pinks, blues, and many other colors followed by a flavorful assortment of creamy tastes are dropping into the mouths of many Americans redefining the idea of what a macaron (not macaroon) is. At first thought most taste buds salivate at the idea of coconut but are quickly redefining their assumptions with every bite but are they keeping up with French standards? 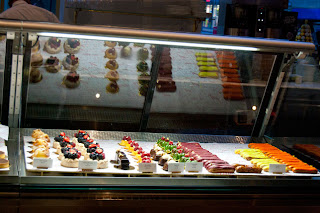 In the heart of downtown LA on the corner of 7th and Grand sits Bottega Louie, a restaurant who's patisserie focuses heavily on le macaron invasion, serves an ADD amount of these little french cookie options. They are known for their macaron's but can they keep up with the likes of Ladurèe or other famous french sweet masterminds? One parisian says "no"; wonder what the others would say...
This is just one experience of macaron possibilities that left an empty box and a sad prospect but the deciding factor: Does it melt in your mouth the second it hits your tongue? 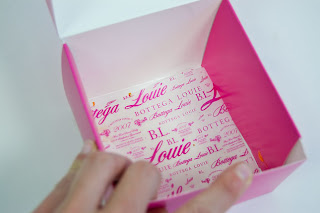 Posted by Pop Culture Taxi and Maxwell at 10:40 PM