Radiohead: From The Strings Point of You 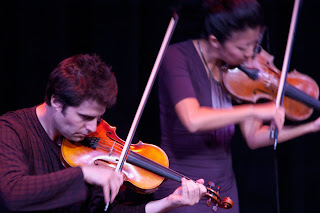 ERIC GORFAIN: THE SECTION QUARTET
had an interesting idea; Radiohead's Bends album from the point of you of string instruments, their string instruments. Radiohead has been a vary popular band for the past 10 years with song such as Karma Police, Creep, and Just. That's a BIG responsibility for any band to take on. HUGE! Let alone 3 violinists and a cello player playing at The Broad Stage in Santa Monica. But it is not the first time this quartet has taken on such heavy tasks. They have performed their version's of Coldplay's Yello, The Postal Service's Such Great Heights, and Muse's Time Is Running Out. 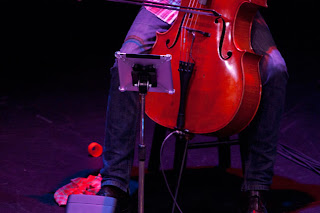 They know what it is like to have to fill big shoes. When listening to an instrumental version of the Bends it was easy to close my eyes and get swept away by their translation. It made me wish, at that moment, I was intertwined with a passionate lover.
It is not hard to understand why so many people adore Radiohead but ask a violin player to play their songs, the ones that they are aroused by, and Radiohead takes on a new dimension.
At that moment I decided there is nothing more intoxicating than Radiohead on violin. 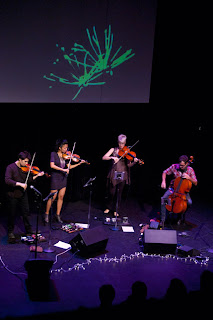 Then again, a night in the lead singers arms might bring me close to ODing.....

Posted by Pop Culture Taxi and Maxwell at 11:31 PM