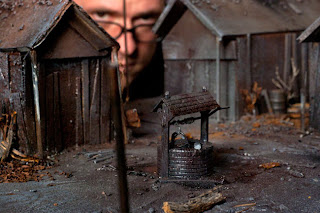 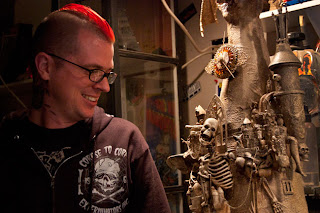 While talking about his brother, before he mentioned his premature death, I could tell that Sapp revered him. You can usually tell a person's character by how they talk about the people in their lives. The little bits of criticism he mentioned stemmed more from a caring, constructive point-of-you than that of a harsh critic. His thoughts varied from one subject to the next and were playful, accented by humor. Tucked away in the depths of his garage a world of plastic figurines waited for someone's attention. It looked like a scene out of Toy Story but created by Shinji Mikami and directed by Rob Zombie. 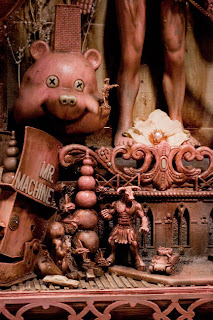 He makes small and large miniature scaled worlds and one is never without a story; a lesson he learned recently. He frequently mentioned his use of toy conversion kits and soldier figurines while explaining his detailed pieces. Though his modesty gets the better of him, it is apparent that the detailed work he does is well beyond average ability. I even checked to see if he has small hands (keep your minds out of the gutter) because I couldn't image anyone with fat fingers creating the kind of intricate work he does. "I use tweezers a lot."
In his bookshelf sits an odd version of the Holy Bible Red Letter Edition; it was a Masonic Cyclopedic Indexed. What the hell? I'm curious.
He admits to being an overly protective father and BTW he's really bad at keeping secrets.
Per his recommendation if he suddenly was to shut up and become secretive, that would indicate a problem. "It would be abnormal to my character."
Currently Sapp's show "When A Good Man Goes To War" is present at the La Luz De Jesus Gallery in Hollywood, Ca.

Posted by Pop Culture Taxi and Maxwell at 11:22 PM